Warning: "continue" targeting switch is equivalent to "break". Did you mean to use "continue 2"? in /homepages/14/d377707900/htdocs/mdspeaker.com/wp-content/plugins/seo-ultimate/modules/class.su-module.php on line 1190
 About Mark | Mark Davies

Mark first started finding out what technology could do when he was 9 and hasn’t stopped since.

His career as a technology consultant for over 26 years has seen him work with both corporates and SME’s helping them get more from their technology and usually for less.

He is a troubleshooter who can resolve seemingly impossible problems by simply asking the right questions. As a Chief Information Officer and Chief Technology Officer he has managed teams of over 200 and multi million pound budgets but that doesn’t stop him getting things done with less, and usually, a lot less! 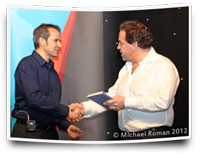 Mark on stage with Nigel Risner

Mark has been involved in information technology for over 30 years starting on micro computers in his early teens and has since worked in the corporate world for over 26 years, including IBM, HP, Boeing, Marks & Spencer and Sainsbury’s from Retail to Insurance from Airplanes to Investment Banks he has seen most ways of delivering IT services. He’s seen what works and knows what doesn’t!

He has worked in positions where he would become the trouble shooter and has been flown around the world many times to drop in and fix seemingly ‘unfixable’ problems all at a moments notice. His ability to achieve these results he says are never just down to knowledge but always was down to methods and knowledge.

“I went from geek to guru to God in only a few months and I was still only 12. It was all about timing and how you present yourself, well that and suddenly every kid in school wanted to know what computer to get!”

He loves working with teams as often they can be the hardest systems to get right, the tech is easy by comparison. Get your team right and the technology and your business just flow.

Mark has always had a passion for technology from starting in electronics from age 9 then moving on to having one of the holy trinity micros (Apple, Commodore PET and TRS-80) he turned into a geek when it wasn’t fashionable. Now oddly it seems to be more fashionable, especially if you have a Mac!

Having spent many years being or working with geeks who were often perceived as simply rude!, he wanted to find another way and studied many many books and courses on self development, NLP, Psychology and Neuroscience. 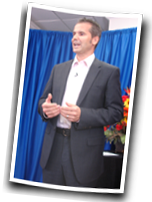 He found that real success is only achieved if you bring the team with you and that task and project focused results only work for a while. He has been a CIO and CTO for various organisations and in his spare time went on to become the Chairman of the YES Group London, the UK’s leading personal development community.

The YES Group allowed Mark to lead a team and create amazing events each month which helped inspire hundreds of people to change their lives.

Today when not speaking and helping business’s and individuals he is a volunteer run director at chelmsford Junior parkrun, and he holds the license for TEDxChelmsford which is having it’s first event in June 2015.